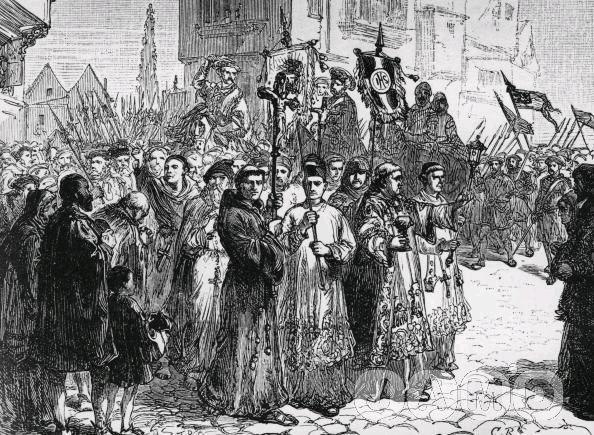 Parishes should encourage devotion to saints because saints provide examples of how a Christian life should look. The saints devoted their lives to Christ; their every action was based on Christ's own actions and commandments. The Church should encourage her flock to replicate the actions of those who have supported her in the past...so that she can flourish and continue to proclaim the risen Christ in the future.
Posted by Maximus at 6:22 PM No comments:

My Church is falling down around me. Who will save it? 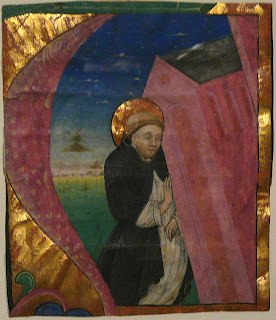 St. Dominic saving the Basilica of St. John the Lateran.

As a young Anglican in a divided church I often wonder what will be of our beloved church in sixty or seventy years. Too young to have a voice in the church as disputes constantly fire from party to party in the Synods, National conventions and Lambeth Conferences. The ancient and venerable Apostolic and Catholic faith in which I have been raised seems threatened by 'progressive' or 'liberal' priests and bishops, who seem to think that as the church adapts to acceptance of the ordination women the ancient and preserved faith must also be thrown out the door. On the other hand priests and bishops who consider themselves the fortresses of the Anglican Catholic portrayal of the faith are abandoning their beloved church. Rome proposes to such Anglicans the ordinate as a 'haven.' And as these priests and bishops leave the Anglican Church they are letting those who are theologically loose have their way. Why not stay to try and proclaim the Anglican faith themselves? I know one thing, I will be an Anglican in communion with the See of Canterbury even if I am the last 'High Churchman' alive. For those who consider themselves as conserving the Catholic faith, it is not protected if it is abandoned for the 'green pastures' of Rome; it is deserted. For those who consider themselves as progressing or liberating the church, the ancient and venerable faith is unconnected to who is or is not ordained or consecrated. The purpose of the church is to proclaim the Love of the risen Christ, not to tear it down ad archaic. So...it what pew will I be sitting in sixty years? I am a member of the Anglican Communion, under the See of Canterbury, but surrounded by the schism and disloyalty that is tearing the church in two. Parties? factions? in a Holy Church? No liberals, No conservatives, No parties! Just the preservation of a faith that we as Christians must preserve for future generations. Who will save my Church?

"From all false doctrine, heresy, and schism; from hardness
of heart, and contempt of thy Word and commandment,
Good Lord, deliver us."

Posted by Maximus at 3:20 PM No comments: